Yesterday we started physical computing and opened our Arduino kit and explore what we can do with it. I’ve tinkered with arduino a couple times before, and made a couple of projects with it. I can say I’m somewhat comfortable with it. However, it’s been a long time since I’ve touched any of these tools so I was refreshing my mind with doing little practices. 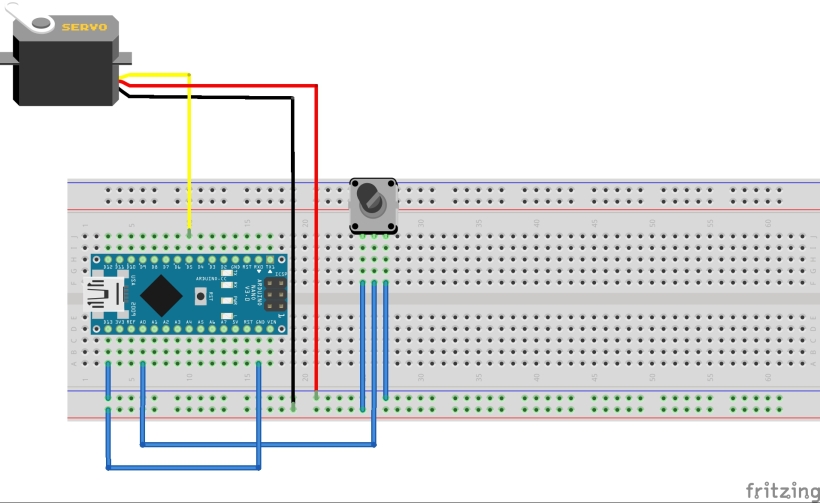 The first one is using potentiometer to slowly fade in and fade out an LED light. And for the second one I use the potentiometer to control the servo motor. I made a Fritzing file and I saved both the codes on my github as “potentiometer_bulb.ino” and “potentiometer_servo.ino” I think getting the habit into documenting stuffs is great and it helps me memorize things better.

Having a tactile experience with coding makes it easier for me to find “poetry” in the context of modern technology. Especially with a wide selection of sensors I can buy off the internet for real cheap. Is tactility helping a digital product achieve the “poetry” I am looking for? But what about all of the other qualities that could make digital and virtual objects have the similar vibe of “poetry”?

If I were to equate my definition of “poetry” to definition of “affect” through “gesture” as Vilem Flusser describes, the characteristics of “gesture” is considered movements of the body of tools attached to the body. So does something needs an attachment to a living being to be considered to have a “poetry”?

This is something that I’ve been trying to look for the answer to. Can an inanimate object have a poetry? I say, absolutely, because I’ve seen it. But it does, in fact, always have relations or attachments to living beings around it, or an anthromorphization by us, the living viewers. It seems like inanimate objects could only be poetic through the lens of living beings.

Anyways, since my observation began, I keep anthromorphizing objects around me. Am I studying too much or am I just an empath? *laughs* I’m starting to realize that my study focus heavily on human and their lenses, technology is just a tool that opens up a new lens.

I’ll start with the good news: I got my Schengen visa a couple days ago! that means I’ll be traveling to the Netherland and get to check out the Dutch Design Week and collaborate with students at WDKA!!

So I managed to consult about my project to Ryan, Annet, Alan, and Margaret. I got great feedback and now I know which direction I can I should take. I will be running into a lot of trouble shooting with the wiring and programming, but there’s nothing stopping me from building robots, something I’ve always wanted to built.

However, I’m still nowhere remotely close to confident with electronics. Alan told me to just write down what I need to do and go at it. Today in thesis my GTI told me the same thing. But I personally can’t just ‘go at it’ without a general understanding of what does what! so today I decided to open an old casette recorder player (found from erecycling bin) that’s only half working to see if I could fix it or if I could harvest some parts from it.

I did practice on how to harvest parts from broken electronics in my intro to robotics class, but it was pretty hard to understand what parts I could use because most of the electronics I found use more modern sensors instead of simple buttons, motor, and gears here and there. so opening an old familiar cassette player was helpful.

So everything was working fine except the assembly of the motor for the casette player.

the rubber band that was there to move the gears was becoming loose and wouldn’t stay in place and the rewind button doesn’t switch the slot smoothly to change the direction of the gears. I figured they might sell these rubber bands online but finding a replacement for this is not worth the time. but the speakers are working just fine.

from the front part, I harvested two healthy stereo speaker and a board with small amplifiers and potentiometer that I might desolder later. from the back, I got multiple gears, a motor, and a might working or might not tape head.

this main chipboard that bunch of microcontrollers are things that I’m not familiar with yet. but it’s amazing how everything is packed neatly in here, creating a functional device to play and record music.

so in the end there were my harvests:

I’m very happy with the harvest result and more understanding on how simple robots work!

Last class, I had the opportunity to learn how to use the industrial sewing machine in the fiber department with Michelle.

this machine can sew thick materials because the needle has diamond point, unlike normal needle that only goes through the in between the weave of the material, the tip of this needle makes a hole to let the thread goes through and sew the materials together.

I need to learn how to use this machine to sew vinyl together to I can make an inflatable piece that will be a part of my project. Next week Michelle told me she would teach me how to use the heat seal to seal plastic based material to keep the air inside.

with scrap material that I found in the donation bin, I practiced setting up the threads and gave it a go and tried out different speed and spacings as well. 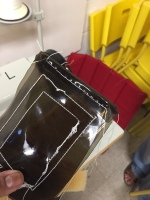 Then later after dinner break we learned the basic of arduino. I’ve taken several of Paul’s arduino courses before and I’m also currently taking an intro to robotic class, so I’m just gonna post picture from Paul’s workshop and talk more about my troubleshooting with my problems in the other class.

next on my robotics troubleshooting, so we learned how to use the function ‘map’ in class and the use of RGB LED. after I was done with the first practice I challenge myself to create 3 analog input that correspond to 3 analog outputs. so with this 3 potentiometer I could create any range of RGB color I want from R0;G0;B0 to R255;G255;B255 it was fun to twist it around have a tactile experience of color picking

so the conclusion is, I think I’m getting the hang of arduino. I need to learn more about different kinds of component to create more possibilities for me to explore.

I signed up for Unravel The Code with a lot of ideas in my head, but not enough skill for what I want to do, so I thought it’d be smart to take an Intro to Robotics class at the same time (it was a smart choice). The class is being taught by Lucas Haroldsen, he graduated from MICA sculpture program and he’s pretty cool. So on Tuesday, I did my first tutorial on electronics in class with different ways to set up LED lights. After the tutorial we were given assignment to put together a circuit based on a couple of schematic drawing options to build from a couple of basic components (transistor, potentiometer, a couple of different motors, lights, and a photoresistor) to work with. I was very fired up about the idea of my first robot I finish a week worth of assignment in one night. I didn’t talk to anyone. Am I turning into a robot? Find out at the end of the class!

So this was one of the schematics that I chose to do:

Which is which, what is what, I had no idea what was going on. But it’s an introductory class for a reason so it came with a drawing:

Nice, right? So I did my best and prototyped it on my breadboard:

I had trouble with the transistor, but after a couple of tries and when everything finally worked out, it felt like jesus was born again. it’s also interesting to see components that look exactly the same but work differently and make an entire circuit works in a different way.

“By turning a small input current into a large output current, the transistor acts like an amplifier. But it also acts like a switch at the same time. When there is no current to the base, little or no current flows between the collector and the emitter. Turn on the base current and a big current flows.” (src: explainthatstuff.com)

So I used the PNP transistor to switch the current to go to the base from emitter (which is connected to the photoresistor) to the collector (the output, here I chose a small motor that functions like a vibrator) and while in the day bug (using NPN transistor) the motor runs when the photoresistor is exposed to light, the PNP transistor switched it around so current flows when the photoresistor does not receive any light. Honestly, I don’t really know how it works, but at least I could understand the flow of the current so I could do my own troubleshooting.

After making sure the circuit is good on the breadboard, I put it together on a tiny copper clad board. Took me a little time to get used to soldering but it feels just like a small TIG welder: 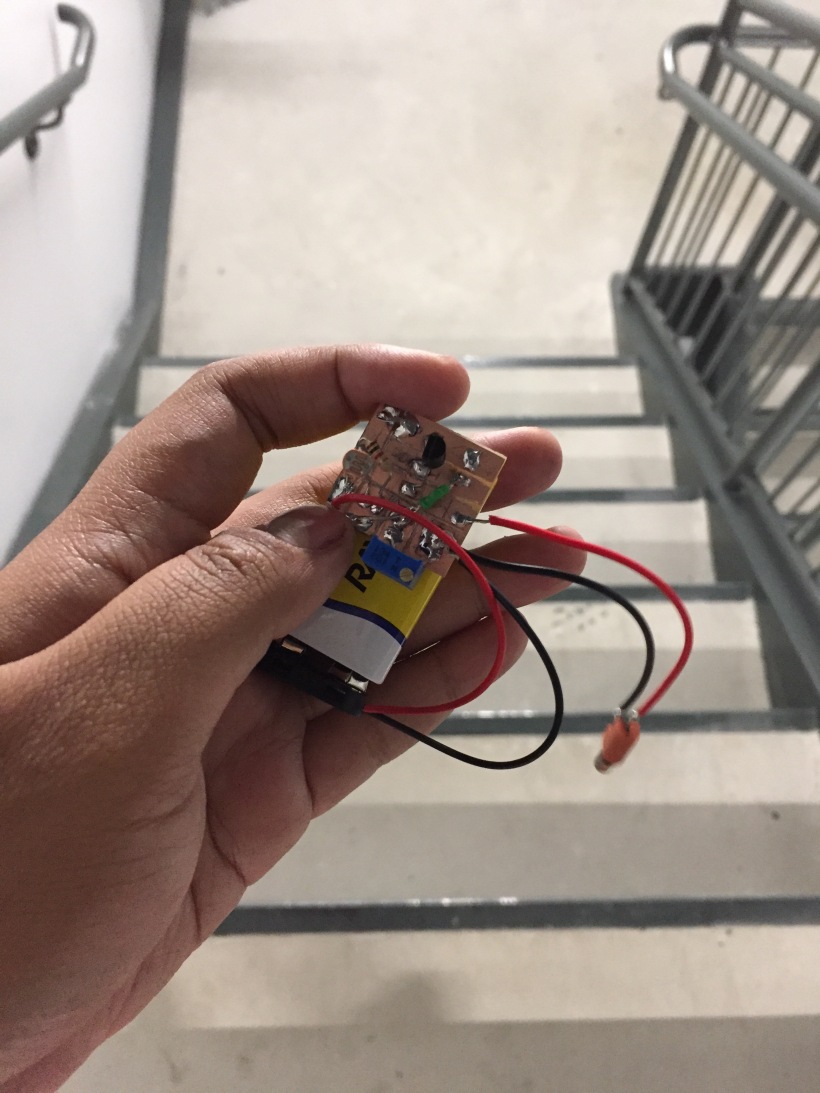 I am still impressed at how all of these things could fit in that tiny board (and how I didn’t burn my hand or anything nearby). I’m so proud of it.

That was my first baby step and journey into making robots, and I definitely will go beyond the class and make more.