Last class, I had the opportunity to learn how to use the industrial sewing machine in the fiber department with Michelle. 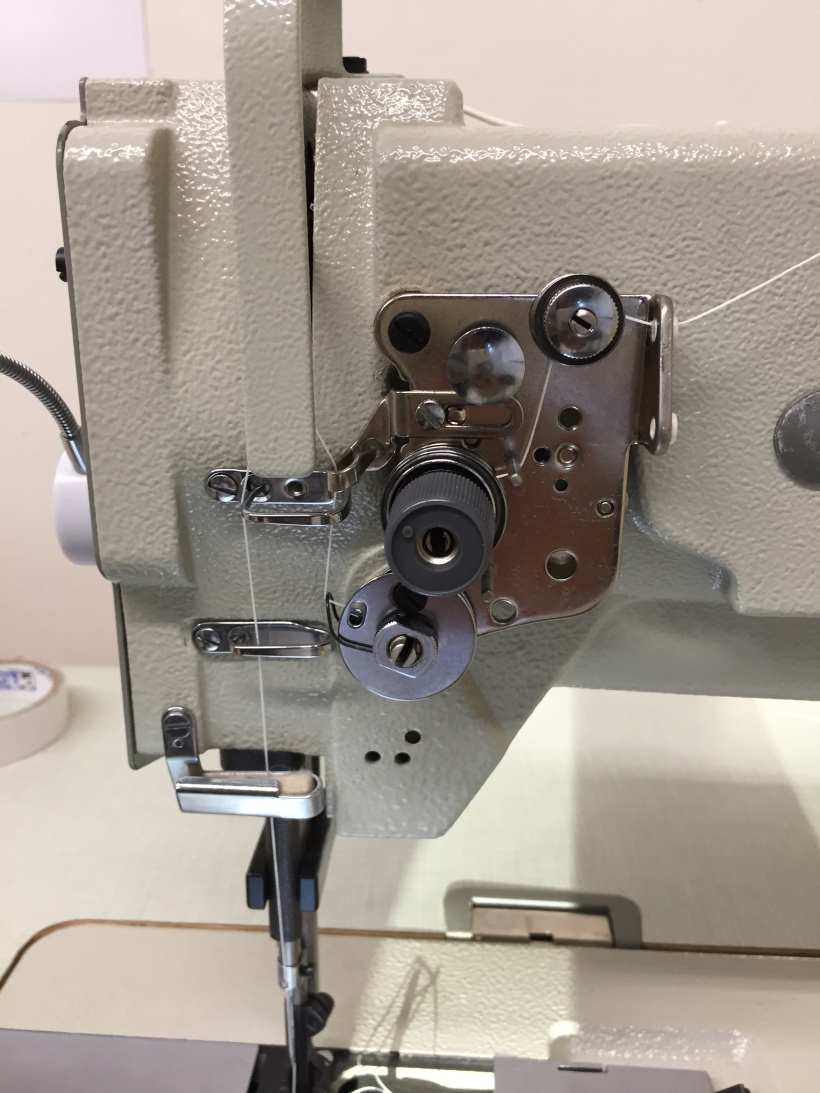 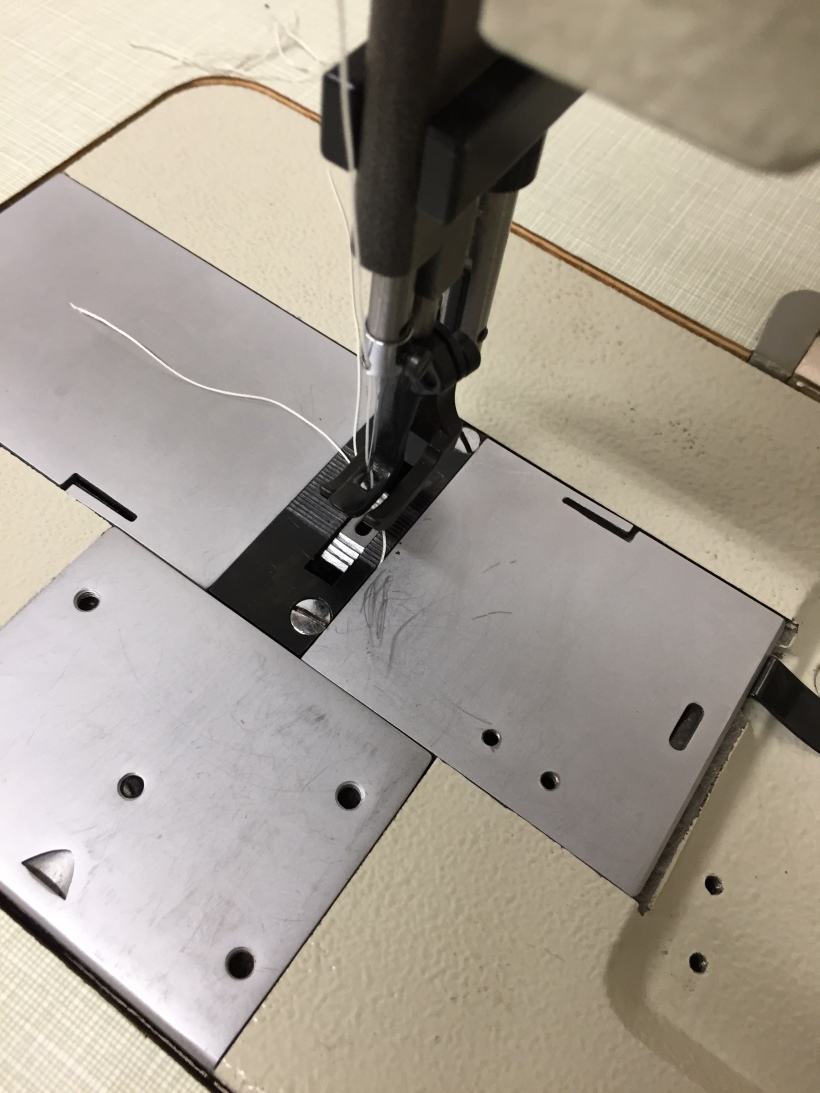 this machine can sew thick materials because the needle has diamond point, unlike normal needle that only goes through the in between the weave of the material, the tip of this needle makes a hole to let the thread goes through and sew the materials together.

I need to learn how to use this machine to sew vinyl together to I can make an inflatable piece that will be a part of my project. Next week Michelle told me she would teach me how to use the heat seal to seal plastic based material to keep the air inside.

with scrap material that I found in the donation bin, I practiced setting up the threads and gave it a go and tried out different speed and spacings as well.

Then later after dinner break we learned the basic of arduino. I’ve taken several of Paul’s arduino courses before and I’m also currently taking an intro to robotic class, so I’m just gonna post picture from Paul’s workshop and talk more about my troubleshooting with my problems in the other class.

next on my robotics troubleshooting, so we learned how to use the function ‘map’ in class and the use of RGB LED. after I was done with the first practice I challenge myself to create 3 analog input that correspond to 3 analog outputs. so with this 3 potentiometer I could create any range of RGB color I want from R0;G0;B0 to R255;G255;B255 it was fun to twist it around have a tactile experience of color picking 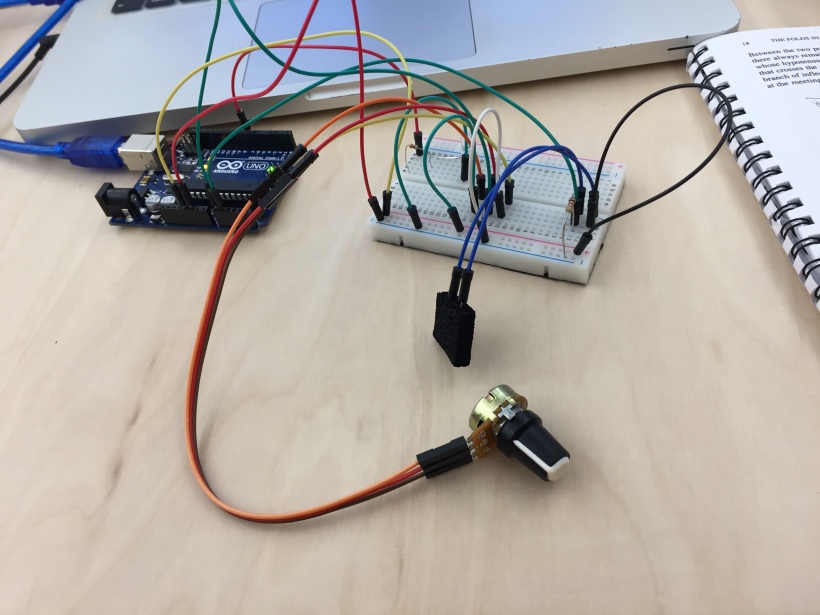 so the conclusion is, I think I’m getting the hang of arduino. I need to learn more about different kinds of component to create more possibilities for me to explore.

First of all, class had not even started but I was already mesmerized by so many of the origamis that our guest lecture, David Kandel, pulled out of his boxes!! 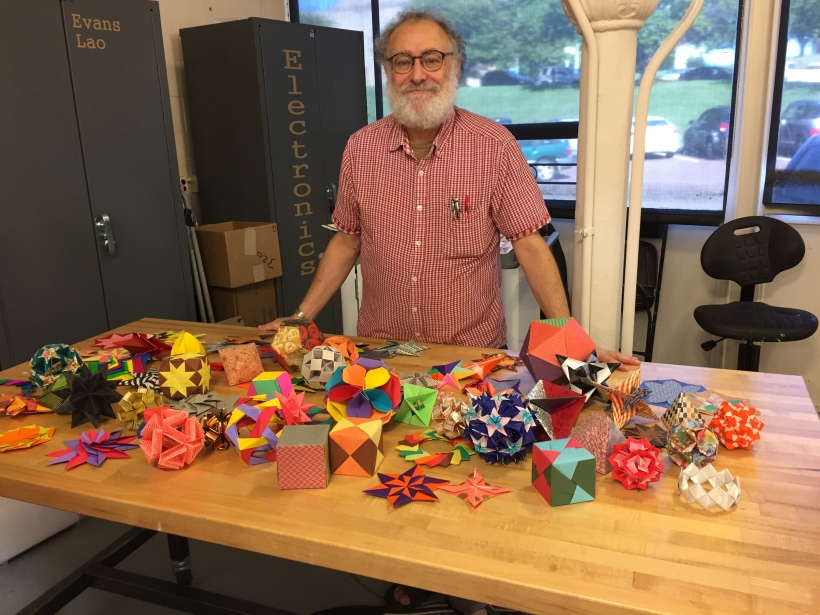 I’ve always had interest in origami and paper folding since I was a kid, sounds like a stereotypical asian background but I was more into it because of pop-up books. Since paper was the most accessible material to get creative with when I was a kid, it is something that I tend to take for granted. I did my Hopkins Extreme Material Institute (HEMI) fellowship on paper structure this past summer, I wish I have had this crash course before I had that opportunity! Because! I learned so much about folding!!! and paper structure!!!! as paper engineers like to say, I got my hands dirty with math that day: 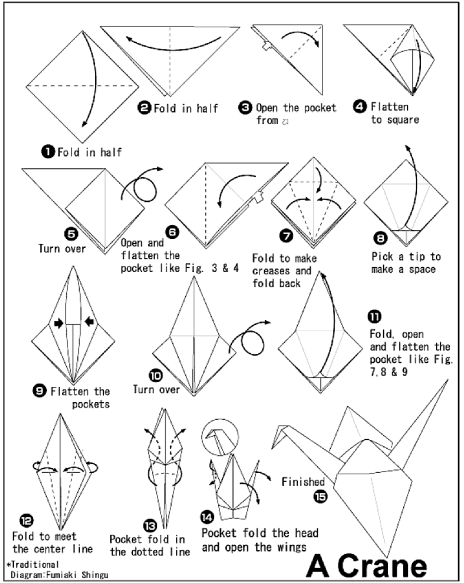 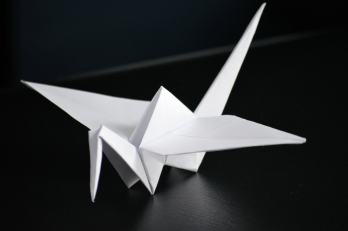 the first sample David gave us was the paper crane. He told the class to give it a try. I learned how to fold this when I was 5 so it’s something I always make whenever I have a scrap piece of paper like receipts and stuffs. I like to challenge myself to fold the tiniest paper cranes. It wasn’t my tiniest, but I folded a tiny paper crane and gave it to Annet. She looks great with it. 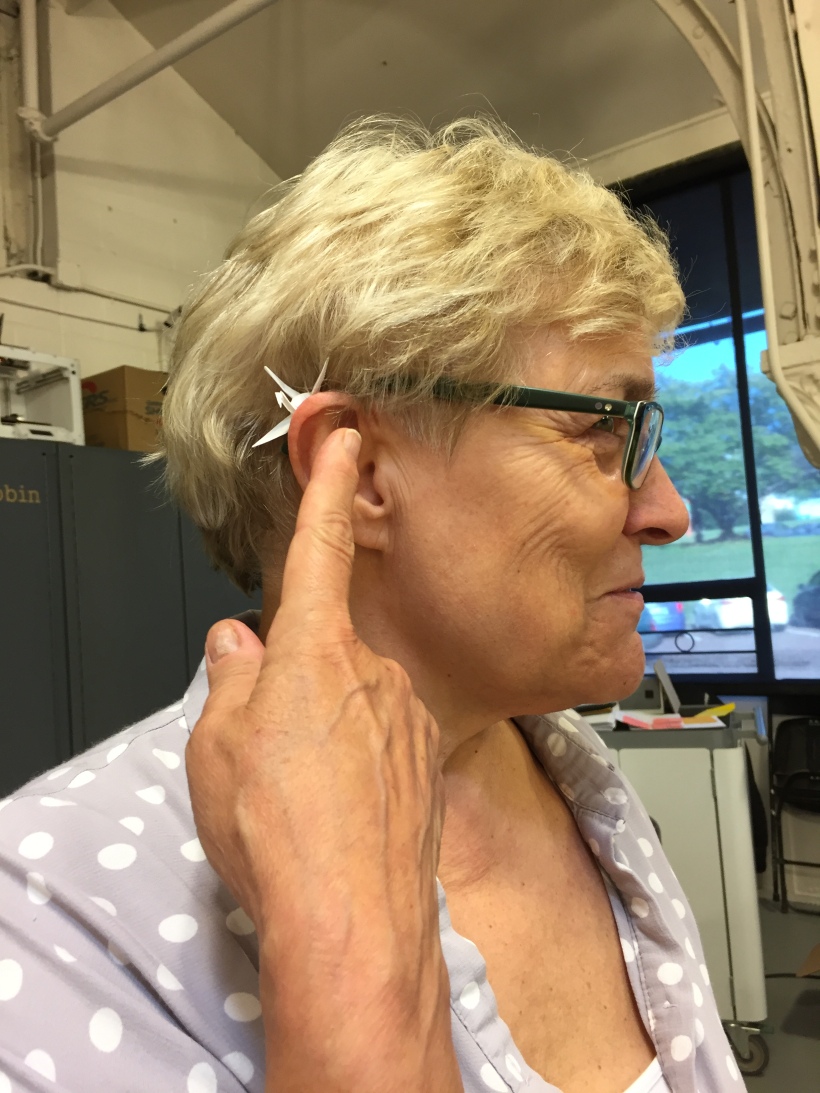 fun aside, it was interesting to learn how to fold this backwards. I learned how to fold these paper cranes in person from an old lady I met while visiting my dad at the hospital. Looking at the structure of the fold and how the valley and mountain folds create a flat material into a 3D object was pretty difficult to visualize. Then David showed us basics of folding patterns to make it easier to understand: 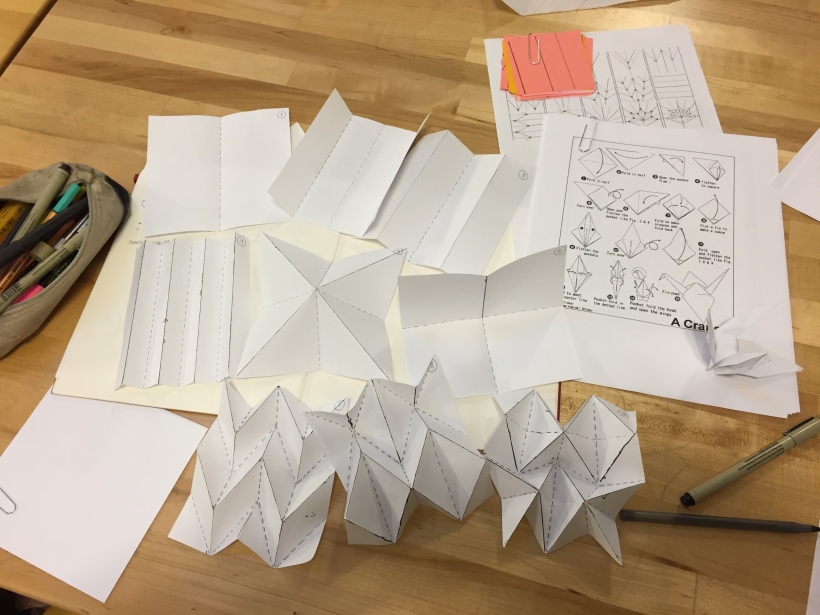 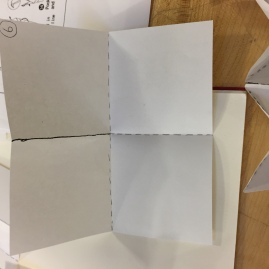 by looking at how different combinations and variations of valleys and mountains create different effect of pleats and dimensions give me more idea of how animal origamis are made.

I got to talk to David before class started because he told me about different amazing kinds of paper from all over the world and I showed him one of the paper making technique used in Japan called yosegi, wondering if he ever heard of it, he never heard of it and was excited to check it out. I’m definitely going to join his next workshop for advanced paper folding.

And for the second half we get to learn how to do those patterns we learned to fold by hand on grasshopper. The advantage? We can make patterns and change and shift the size by changing the input, and directly lasercut it onto our material.

so just like weaving on grasshopper, we started with making a grid

we cull the end of the list because we’re about to make zigzags here and we can’t use all points to make zigzags because it’s gonna go off the page! but it’s not offset yet, the zigzags won’t happen unless every other rows are offset to the opposite direction

mmmyas. it doesn’t look quite like the pattern from the origami workshop yet though. but we can have zigzags that going to different directions by using different input of the dispatches (we’ll call the first one zig and the second one zag) from zig(a-0) zag(b-1) or switch it to zig(b-1) zag(a-0)

they’re all crossing one another! but if we use pick and choose we can get rid of what we don’t want

so there’s our pattern, we wanna make it pattern throughout the boundary so let’s use long list

and like our weaving grasshopper workshop, we want it to not only repeat the last polyline, but all. so right click on that and choose wrap instead of repeat last.

Then Ryan taught us that we can lasercut things directly from grasshopper file without baking it to Rhino!! wowwie thanks Ryan for this dFab plugin!

So I think I’m even more sure now that I’m getting the hang of grasshopper! I can’t wait for our next workshops. I would attach my grasshopper file for the workshop here but wordpress won’t let me. Oh and here are a couple of book recommendations from Annet and David that I might get or check out at library later.

In class we learned how to weave, physically and virtually. It is the simplest form of coding language: up/down, front/back, true/false, 0/1, etc. For the first half of the class, we were divided into two groups, I got to be in the first group and learn how to do irl weaving first. I have never done any weaving nor taken any fiber class so this is my very first experience with the technique.

First we learned how patterning works, it was confusing at first with the power point presentation but when we got down to actually do it, it made sense

it felt like doing a puzzle it was fun

and then we had to make our own, as well as practicing real weaving 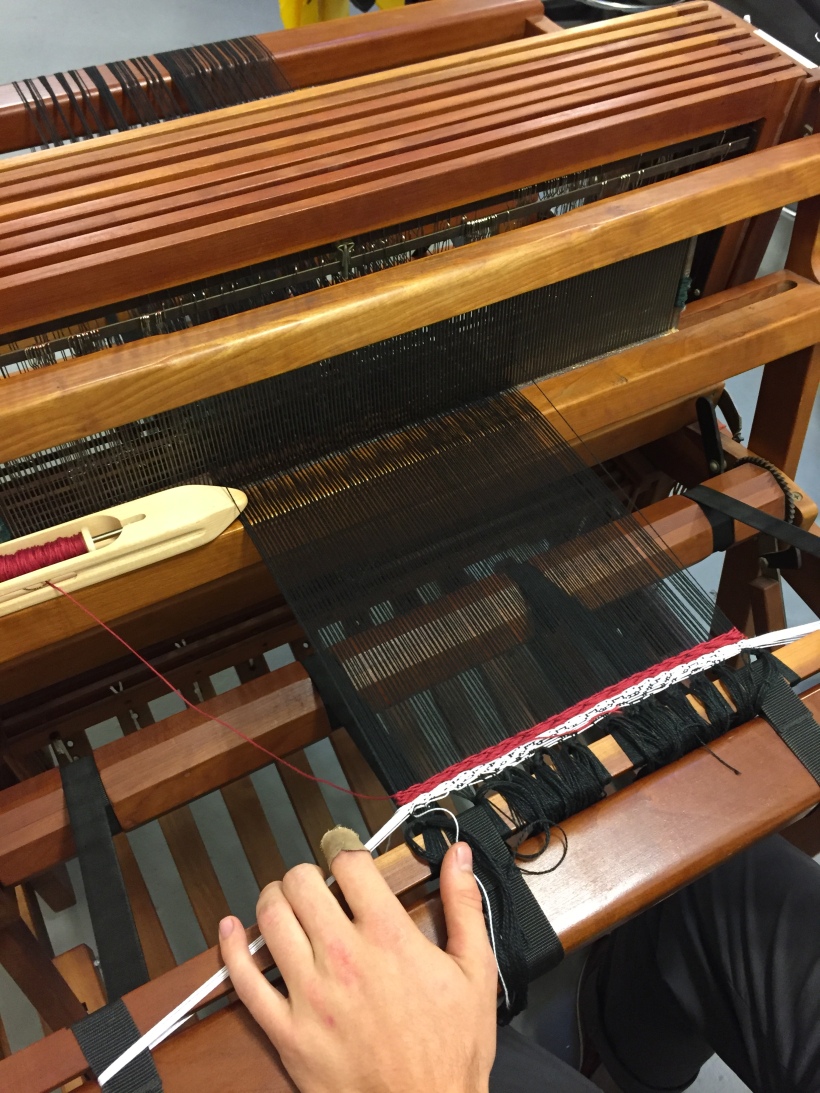 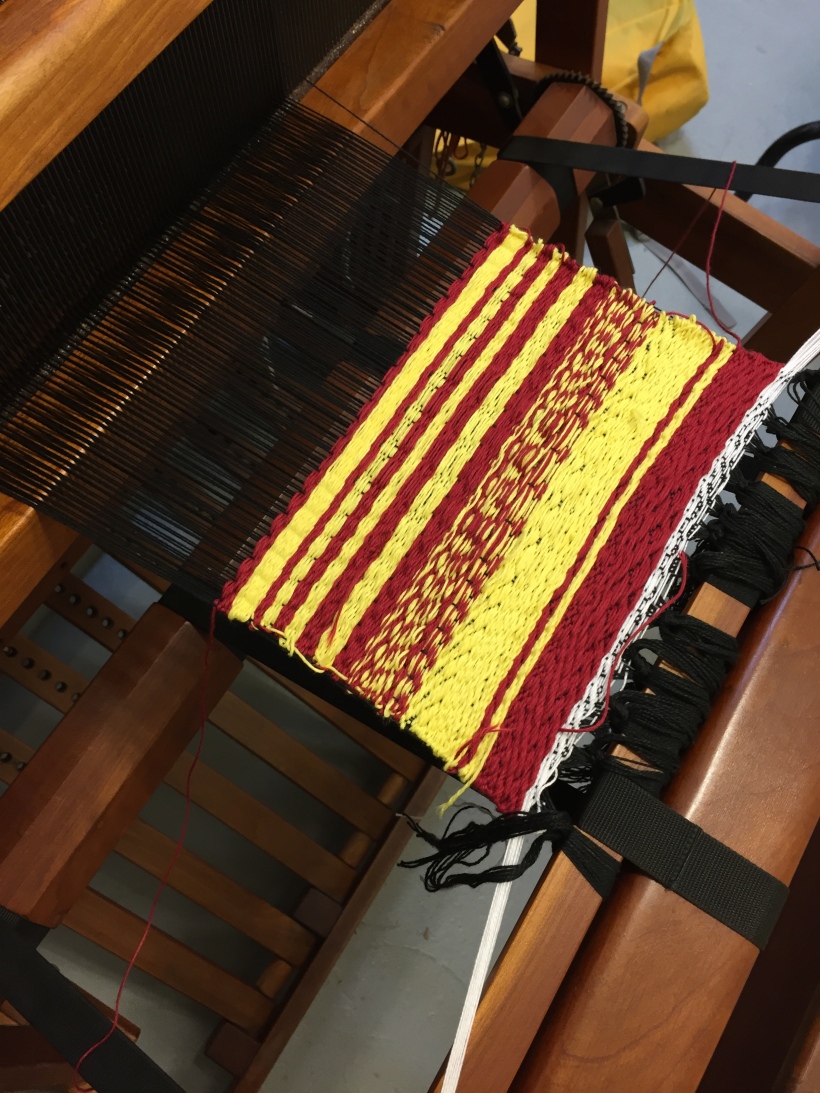 And for the second half of the class, we got to learn how to do weaving pattern on grasshopper. THIS TIME I THINK I’M FINALLY GETTING TO UNDERSTAND GRASSHOPPER. still not sure, it’s been a long battle, but I got to tweak it around on my own and I think- I’d like to think- I’m finally getting the grasp of it.

yas use that pipe and make it wormy

Then there’s a more complicated way to do it:

Why choose the complicated one though? Because wowwie look at that! When you change the input you can use this grasshopper code not only for plain weave but also twill weave!